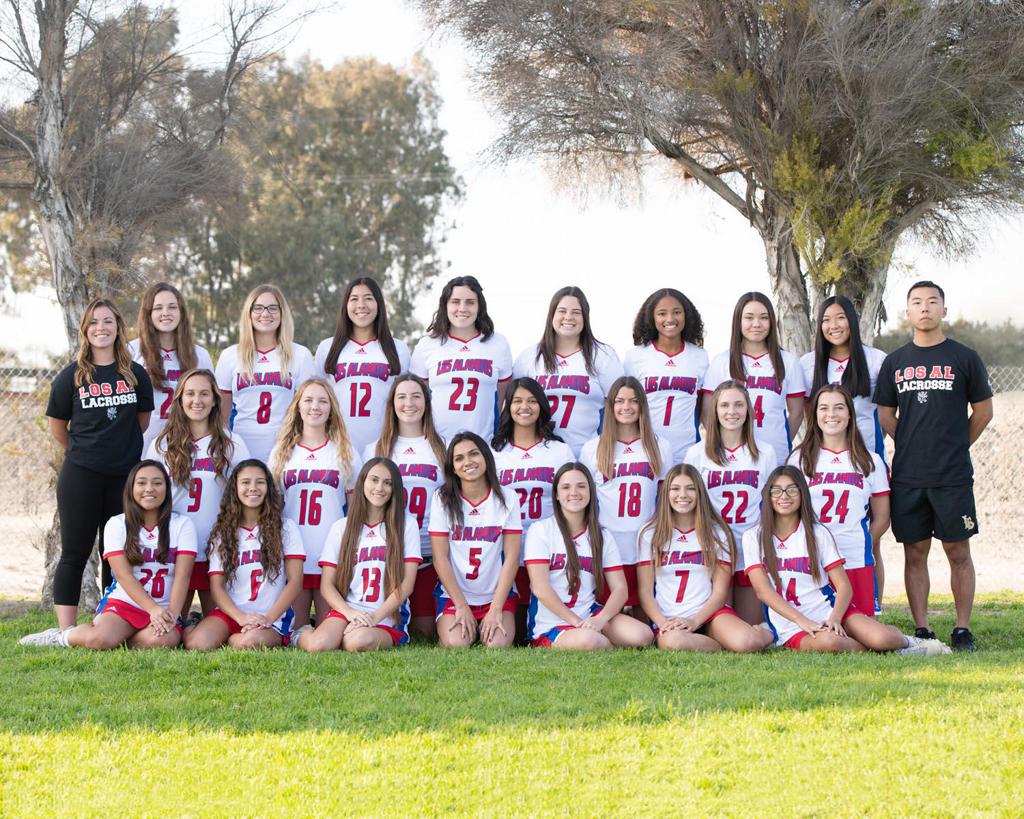 The third game was the charm for the Los Alamitos girls lacrosse team, as the Griffins beat Esperanza 17-6 on Tuesday at Esperanza High School.

In handing the Aztecs their first loss of the season, the Griffins gave their new coach Courtney Novak her first win as the Griffins’ head coach.

“They [Los Alamitos] brought so much heart. I think we prepared them mentally, physically and tactically and they really had to bring that extra spark, and they did tonight and it was absolutely beautiful,” Novak said.

From the opening draw, the Griffins were determined to win, as they opened up a 3-0 lead over the host team. The Griffins dominated possession throughout the game and never allowed Esperanza to get any closer than two goals.

The Griffins were led by Riley Deutsch and Sydni Jenkins, who each had five goals. Ava Cannning and Sonoko Silvers both had two goals apiece while Samantha Wehr added a goal for the Griffins, who got nine saves from Madison Shean.

“I think it’s important not to rely on any specific player, but instead work together as a team,” Deutsch said, adding that their win was a team effort.

Novak was proud of her team getting the first win of the season after suffering losses to No.5 Trabuco Hills and No.6 San Clemente. The Griffins also went into Tuesday’s game without Victoria Hansen, Faye Deal and Naomi Laurain, who are all out with injuries.

“I’m mostly thrilled for them because I’ve seen how hard they’ve worked since August. They put in the work and now it’s just the fruit of their labor. I’m just beaming with pride right now,” Novak said.

Esperanza was led by Sydney Danielson who had three goals while Aide Martinez had two goals. Julia Beatty also added a goal for the Aztecs, who got six saves from Gabriella Schrader.

Up next for Los Alamitos (1-2), a road game against No.2 Foothill on Monday. For Esperanza, its next game is Thursday at Edison.

Anika Rodriguez, Karina Hernandez, Riley Deutsch and Victoria Hanson have been named co-captains for the 2019 Los Alamitos girls lacrosse team. The announcement was made by first-year coach Courtney Novak.

Rodriguez will be playing her third season of varsity lacrosse this year. During her time on the team, she has received the most-improved award. After high school, she will continue on to go to Cosmetology/Barbering school at Golden West College, and pursue her scuba training license to use while fulfilling her dreams of traveling.

“Anika is a leader driven by action and perseverance. When no one is looking, Anika is the one doing the extra reps and pushing herself to be better each day. It wasn’t a surprise her fellow teammates wanted her to be one of their leaders on the defensive end. Her coaches and teammates have noticed her hard work and her ability to lead by example,” Novak said.

Hernandez will be playing her fourth year of lacrosse, her third at the varsity level. Hernandez looks forward to the challenge of helping and guiding her teammates to fulfill a very successful season. After lacrosse and high school, Hernandez will attend a 4-year university or college to help her achieve her career goals.

“Karina’s energy impacts everyone around her and having her in a leadership position puts her in a situation to be the spark. Her speed and fast footwork on the defensive end makes her a force to be reckoned with and her teammates look to her for that encouraging remark,” Novak said.

Deutsch will be playing her fourth year as a varsity lacrosse player. Her love for the game extends beyond playing, as she coached a U15 team for Beach Cities Youth Lacrosse last year, and is now officiating U15 games as a member of the Southern California Women’s Lacrosse Officials Association. Next year, Deutsch will be attending Vanderbilt University to study Biomedical Engineering with plans to attend medical school.

“Riley is our vocal leader who demonstrates critical thinking on the field by finding a way to create beautiful lacrosse. She encourages her teammates and works hard off ball to set players up for success. Her talent and passion for the game are evident as soon as she steps foot on the field and we are thrilled to have her as one of our leaders,” Novak said.

Hansen is entering her fourth season on the varsity lacrosse team. She has been awarded Rookie of the Year and Midfielder of the Year, as well as numerous academic accolades. Hansen enjoys spending her free time sharing her passion for lacrosse with aspiring young players. After high school, she plans on attending a four-year university to further her education.

“Vic is a natural born leader and unfortunately suffered a knee injury in the offseason that has led her to lead from the sidelines. Her understanding of the game makes her a fantastic role model to the underclassmen and an asset to the team. Vic demonstrates important leadership qualities and we are thrilled to have her as one of our captains,” Novak said.

All Players  must receive Athletic Clearance in order to play lacrosse.  If they do not, they will be ineligible for games.  Los Al has an online system for athletic clearance.  Instructions on how to complete the clearance can be found here.  The physical exam must still be completed (including physician stamp) and turned into the Athletics office.